By default, upon startup the SmartScope app will be in Analog mode. Whenever you are in a different mode, and want to return to the oscilloscope mode, simply select it at the top of the main menu: 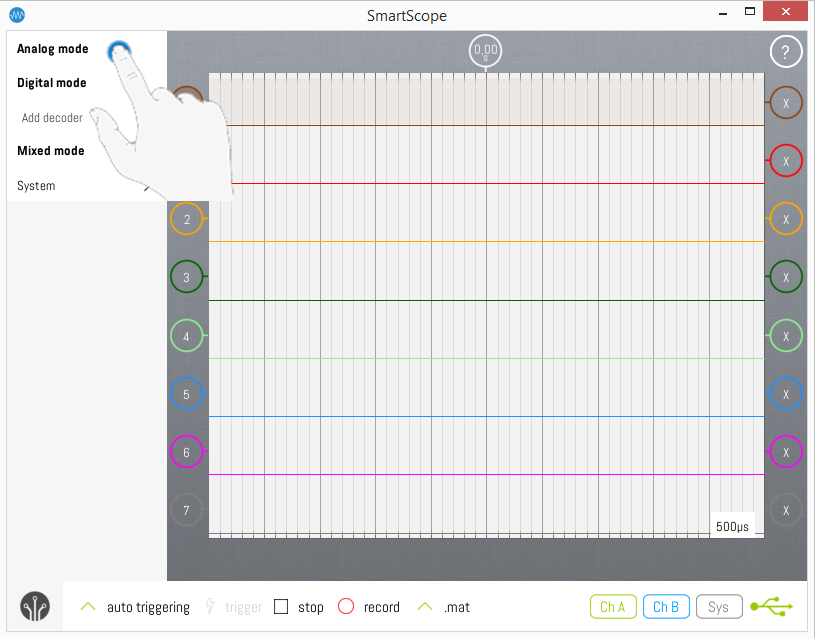 The key parts of the main screen are shown on the image below. This image can be used as reference for the rest of this text. 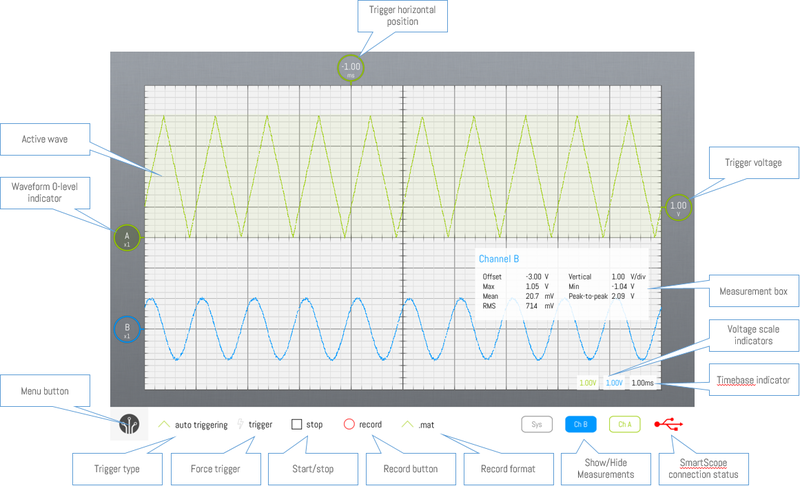 When applying a signal to the inputs of the oscilloscope connectors, you will want the signal to be displayed nicely on the screen. Since the oscilloscope has pretty large input range, this will involve some scaling and panning depending on the signal. Usually, this involves zooming out both in voltage (vertically) and on the timebase (horizontally) until you’re happy with the size of the signal, and then panning the wave to the area where you want it to be.

Scaling and panning only affect the ‘active wave’ (the signal currently selected). You can easily see which wave is currently highlighted, as:

Changing active wave can be done in the following ways

See the image below on how to select the blue wave as active wave: 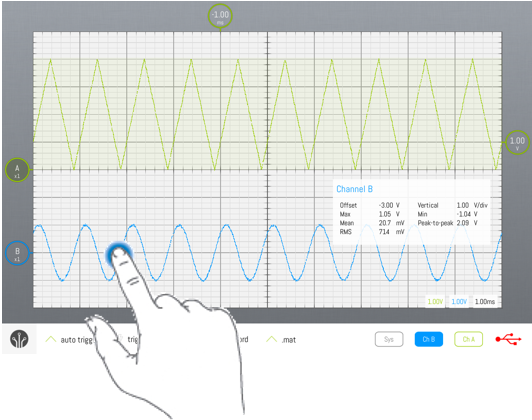 Alternative ways where the active wave will be selected automatically:

Zooming in or out the voltage scale of the active wave is done through the following operations:

The grid in the background can help you determine the voltage level or amplitude of your signal. The grid is split in 10 divisions, and the voltage of each division is displayed in the Voltage division indicators, on the bottom-right of the screen. Notice that each signal can have a different scaling factor, and such there is one indicator for each wave. The image below shows how touch-based voltage zooming on the green wave can be done: 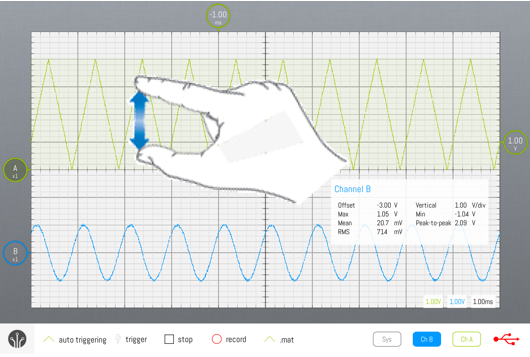 Additionally, the voltage can also be adjusted using the picking wheels at the bottom-right of the screen. To do so, simply drag them up or down as shown in the image below. 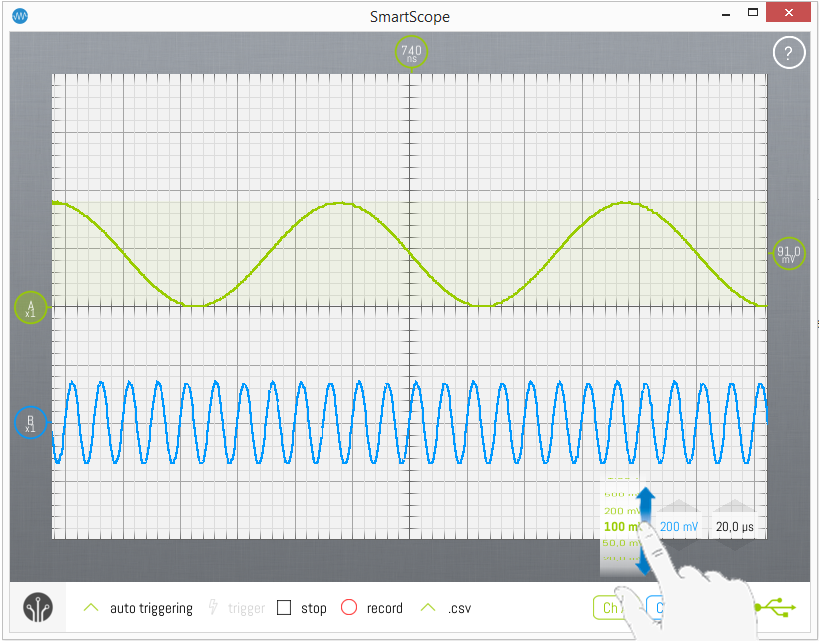 Depending on whether you want to visualize a fast signal or a slow signal, you’ll want to set the timebase accordingly. This can be achieved using the following operations:

The grid can help you determine the timebase of your signal as well. The grid is split in 10 horizontal divisions, and the timespan of each division is displayed in the Timebase indicators, on the bottom-right of the screen.
The image below shows how timebase zooming can be done using a touch screen: 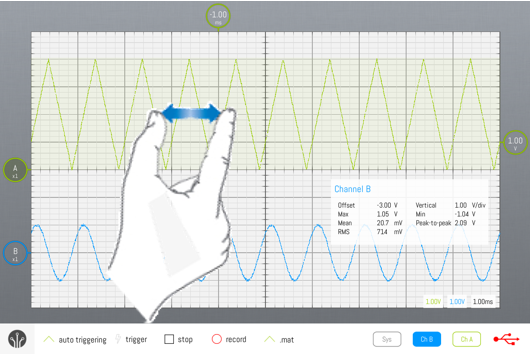 Additionally, the timebase can also be adjusted using the picking wheel at the bottom-right of the screen. To do so, simply drag it up or down as shown in the image below: 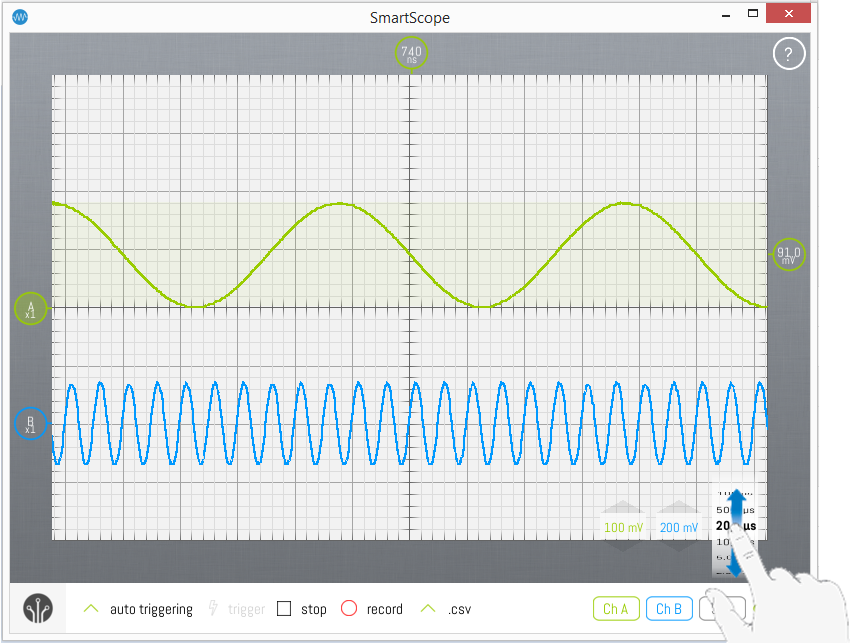 While zooming allows you to fit the signal on the screen, you’ll also want to position it to your liking. Here are the operations to achieve this:

Using touch/mouse, you can drag either the wave (notice the faintly colored background behind the wave: this indicates the sensitive area!), its 0-level indicator or the horizontal trigger indicator. Dragging the indicator has the benefit that they auto-snap to the grid divisions.
Dragging will also occur when, while pinching, you move both fingers in the same direction.

When using touch, you’ll often want to set the timebase or voltage offset to 0. This can be done accurately in these ways:

You can switch between DC and AC coupling, simply by clicking/tapping the wave indicator, and selecting the desired coupling mode. This is shown in the images below: 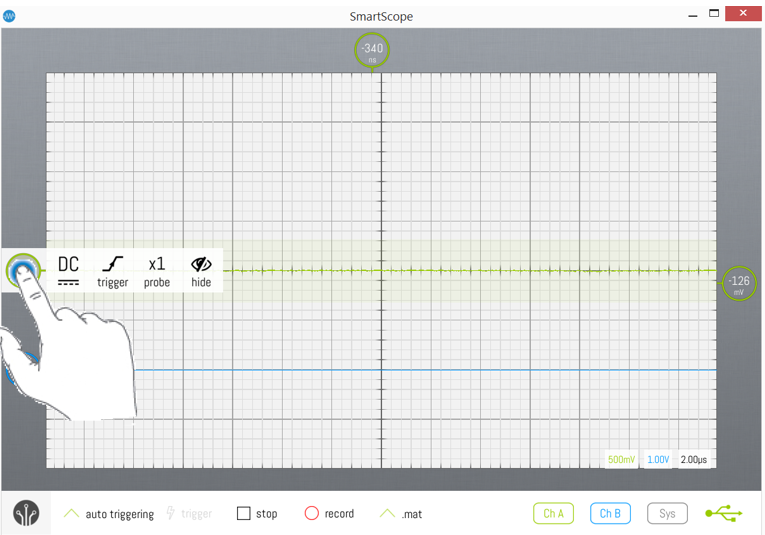 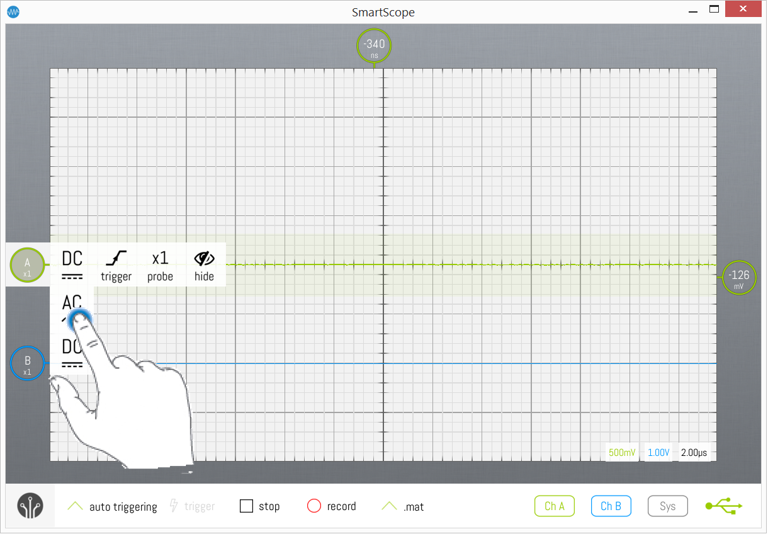 Triggering is essential for two reasons: 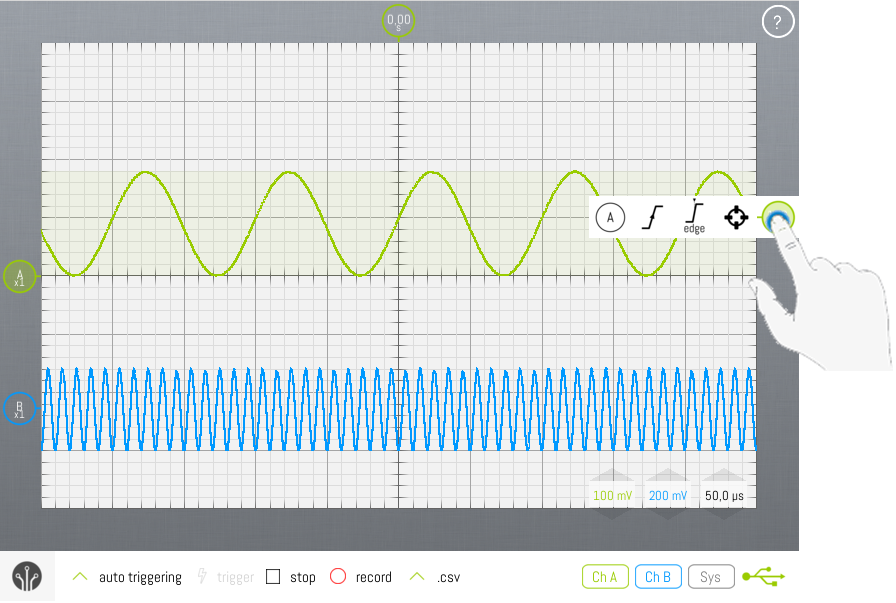 You can specify which channel to trigger on, by opening the Trigger context menu as shown above, and tapping on the leftmost item. This will display a list of channels on which you can trigger. Changing trigger channel can also be done by hitting the T key when a keyboard is available.

In the Trigger context menu, make sure the main trigger mode is set to Edge (shown in the image above). Next, you can specify which type of edge to trigger on, by opening the Trigger context menu as shown above, and tapping on the second leftmost item. A small drop-down menu will be shown, allowing you to specify whether on which edge you want to trigger. This is shown in the image below. 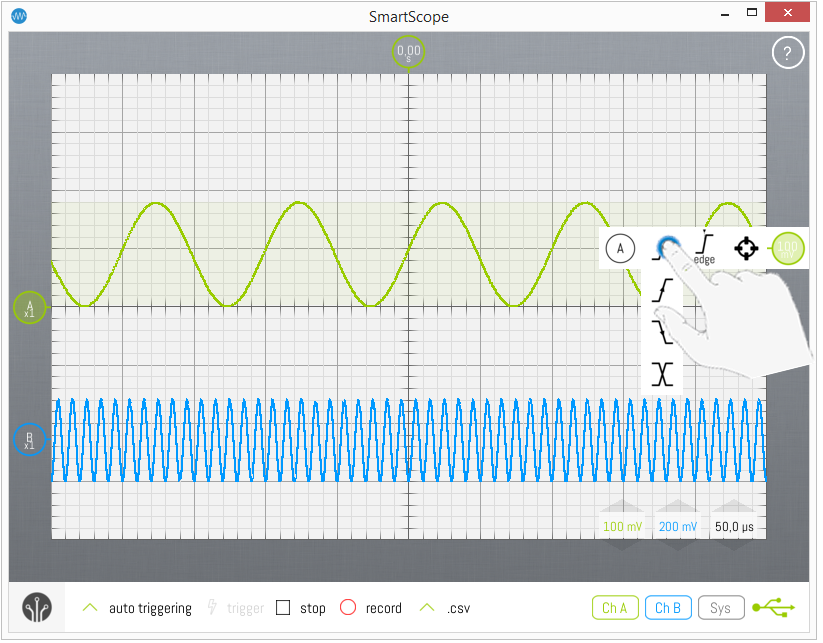 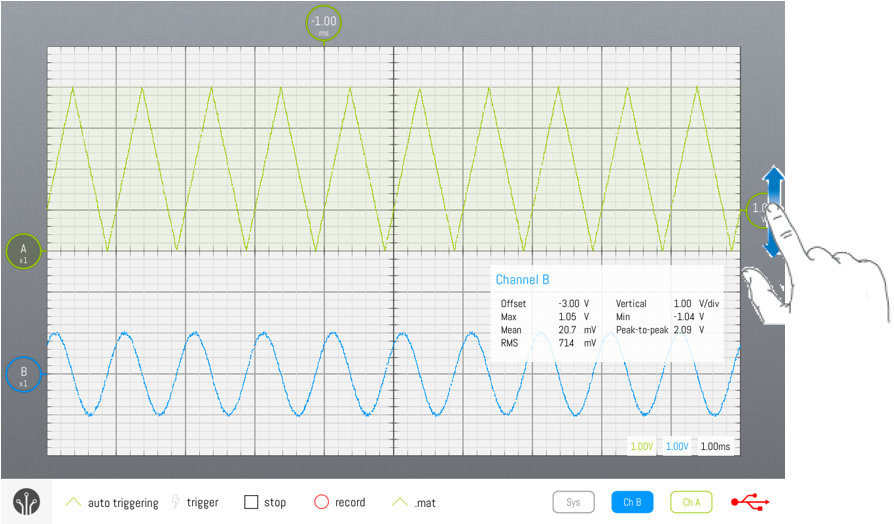 Changing the type of triggering

By default, the SmartScope will start using Auto triggering mode, and will switch to Rolling mode whenever you zoom the timebase beyond 20ms/div, to visualize slow signals. However, you can freely select the trigger mode of your choice by tapping on the Trigger type drop-up list, as shown below. Notice that the ‘Rolling mode’ is only available when you’re visualizing slow signals (20ms/div and up). 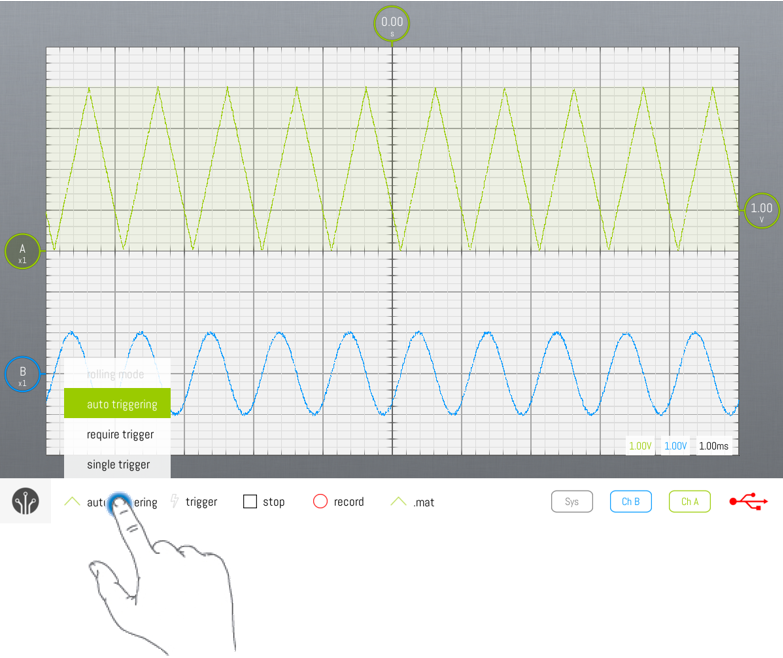 In Auto mode, every time a trigger is detected, the waveform is acquired, transferred to the host and visualized. Whenever the trigger is lost (eg: when the input signal is removed, or when the signal changes so no more crossings with the trigger level occur), the SmartScope sends any acquired waveform to the host for visualization

Single mode puts the SmartScope in waiting mode until a trigger is detected. In such case, the waveform is acquired and visualized, after which the SmartScope puts itself in Stopped mode. Single mode is useful in case you want to visualize the very first occurrence of a trigger, or in case you want to capture a unique event and don’t want to remove the result in case of some glitch occurs when you remove the probe.

When you’re visualizing slow signals, you end up with timebase settings like 100ms/div. With 10 divisions, this means it takes 1 seconds before an acquitisition can be made, so you only get screen refreshes every second. In such case, it is usually preferred to visualize the data as a continuously incoming stream of data, as you get realtime updates of the signal and you can stop the SmartScope whenever you want.

See the main page on Cursors to find out all details about them. 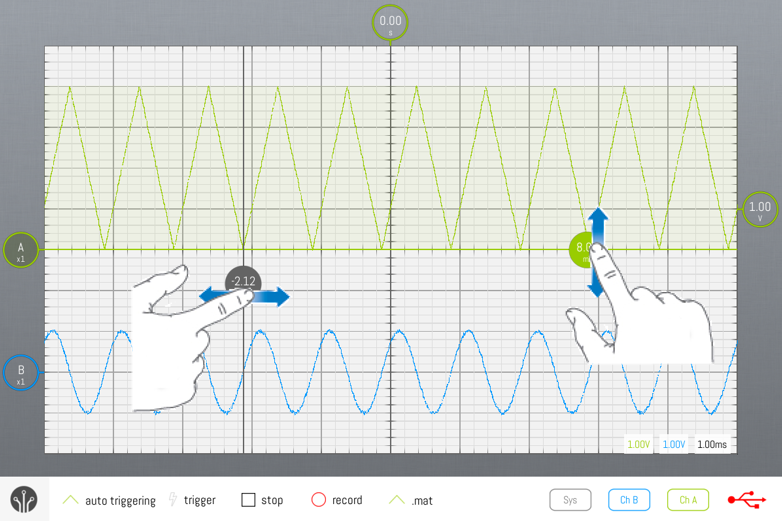 The Measurements subsystem has been significantly expanded since v0.13, and therefore they are covered in the dedicated Measurements section.