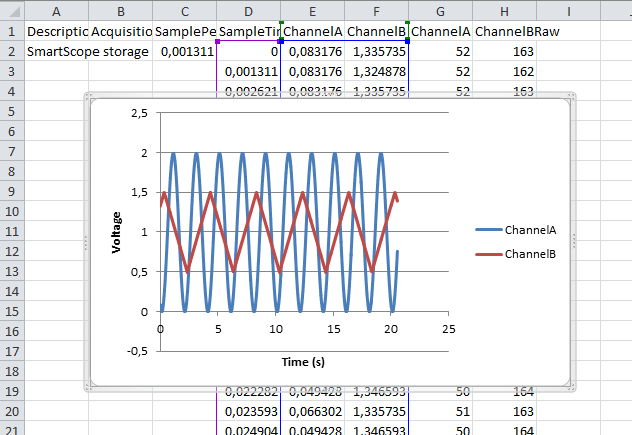 The first secion of this page discusses how to record your acquisitions, while the second section deals with manipulating and visualizing the data recorded to disk.

Start by selecting your output file type at the bottom of the main screen.
Opening and visualizing the contents of these files will be handled further down this document. 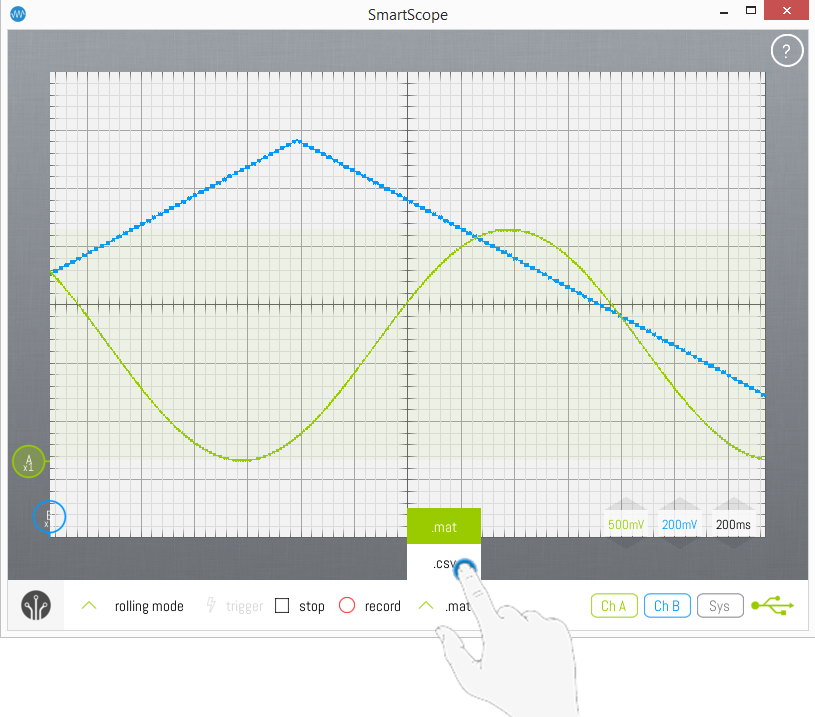 You can choose between 4 ways of recording your data, each of them explained further on:

In case you want to record slow signals over an extended amount of time, you simply zoom out on the timescale until the SmartScope switches to Rolling mode, and hit the Record button. You should notice the following while recording: 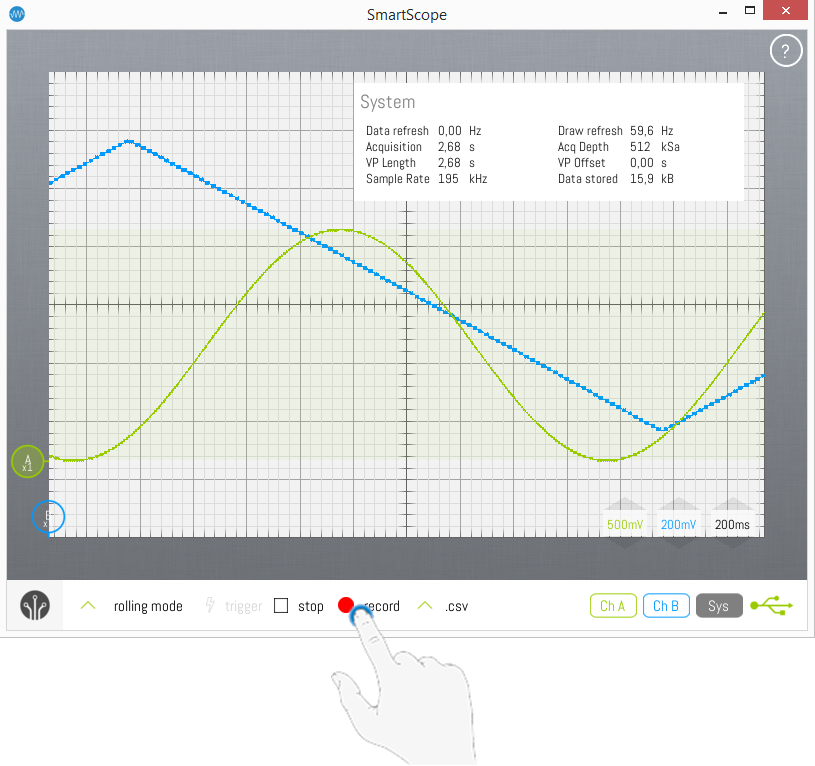 While recording in rolling mode, all channels will be sampled at around 700Hz, and each sample will be stored to file. When you’ve finished recording what you need, simply hit the record button again, and a dialog will show you where the file has been stored. 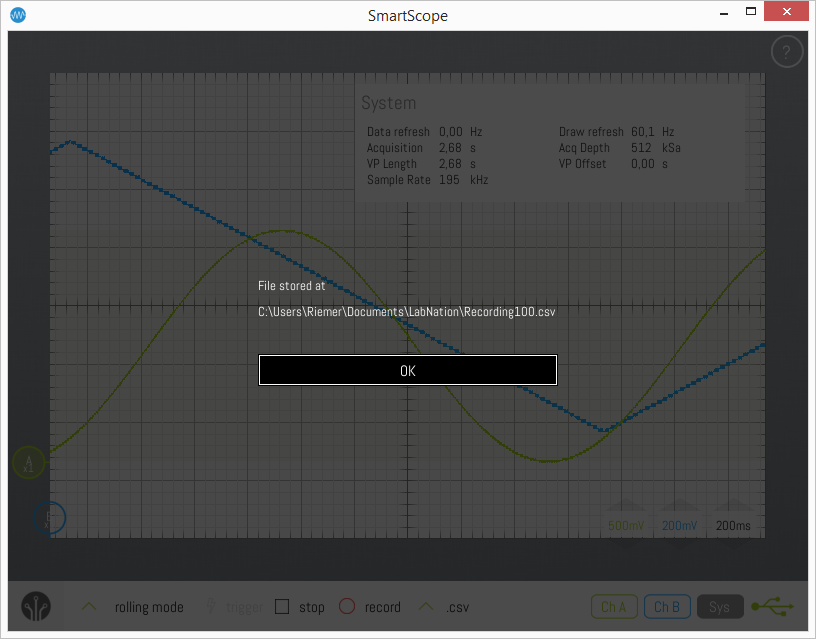 In case you want to record higher-frequency signals, you’ll typically be out of rolling mode. With sufficiently fast timescale, there can be more than 100 screen updates every second. Every incoming voltage can be saved to disk, simply by hitting the Record button. As long as you’re recording, all incoming data is both stored to disk (hiPriority) and shown on the main graph (lowPriority).
Note: this means the final filesize can grow rapidly! Keep on eye on the ‘Data stored’ entry in the System measurement box. Especially .csv files can grow large, making them very slow to open/handle in Excel.

The previous scenarios don’t allow you to record for really long timespans (eg hours or days), simply because the amount of data saved to disk would result in huge files. This can be done, but you’ll face trouble when opening them, especially with Excel which is really slow in handling large files. Instead, the SmartScope allows you to save only 1 recording every X seconds. Or you can also save a burst of Y recordings every X seconds. In order to do this, go to Menu -> System -> Recording, from which you can both set the Interval in seconds (X in the text above), as well as the number of Acquisitions to store in one burst (Y in the text above). 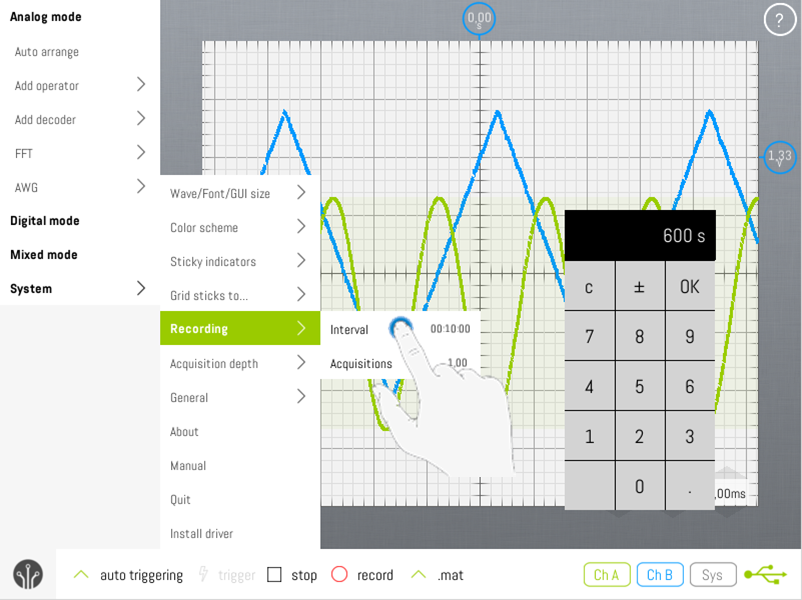 Now when you press the Record button, you’ll see that the ‘Data stored’ property of the Systems measurement box only increases at each interval you specified above. As a result, the file on disk will only contain the bursts at intervals you specify, allowing you to record over very large timespans and still keep the file very small.

Note: this doesn't work in rolling mode. However, while in rolling mode you can always set the the Trigger mode to 'auto trigger'. This gives a visually less appealing result, but allows you to record with a specified interval.

In all other modes above, all data shown on the screen (and potentially a bit more to the left and right) will be recorded to disk, which typically means 2048 samples for each channel for each acquisition. If you want to store the contents of the full RAM, this is also possible: simply stop the acquisition and wait till the full RAM contents has been downloaded (indicated by the green progress bar in the Panorama). Once this is complete, hit the Record button. You will be presented with the dialog below, asking you if you want to store the current data. When you click OK, the full contents of the RAM will be stored to disk.
Important: You have to wait until the entire contents of the RAM has been transferred (see previous line). When you hit the Record button before this transfer is complete, only the Viewport data (2048 samples) will be written to file.
Note: Excel has a limit of max 1 million rows, so if you’re using csv+Excel make sure you keep the RAM depth to the default setting of 512k.

Navigate to the recorded file. In case MS Excel is installed on your system, simply double-click the file and its raw contents will be displayed in Excel. 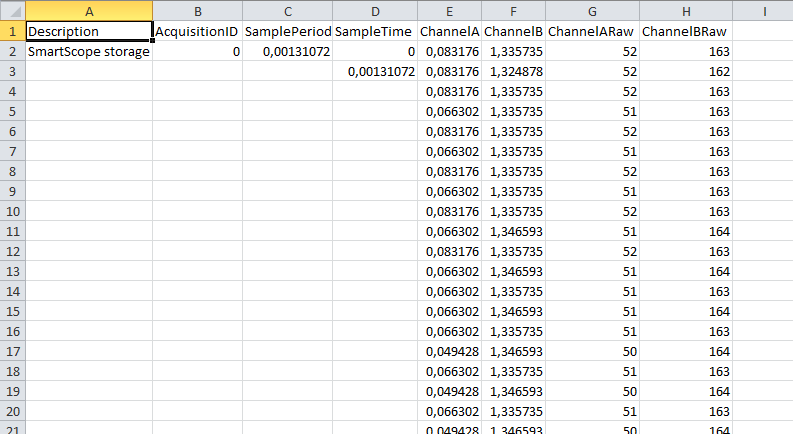 In most cases, you’ll be interested in ChannelA/B columns, as these contain the voltages of both channels. Each row contains a new acquisition, with the time between each acquisition specified in the SamplePeriod column.

In case your csv file was recorded while not in rolling mode (to record higher-frequency signals), a lot more data will be present in your file. Basically, each waveform displayed while recording will be saved as a column of up to 2048 samples. Simply double-click on the file to open it with Excel.

From here on, each column represents a full waveform (typically 2048 samples) of the channel specified at the top row:

The image below shows an example of how a fastly moving signal can be visualized in Excel. See the next section on more information on how to convert the data discussed above into a graph.

Note: Because of USB bandwidth and disk limitations, it is not possible to record all data to disk. Instead, scopes record short chunks of data, called Acquisitions in the text above. In case of the SmartScope these acquisitions contain 2048 samples, and each acquisition is presented as a separate column. It is important to understand that 2 acquisitions are not consecutive to each other: there is data between them which was not recorded. In case you need consecutive data, switch to Rolling mode instead. 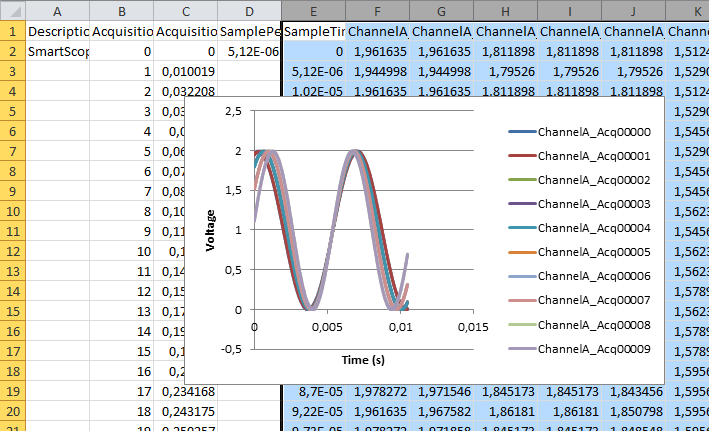 Creating the time axis - visualizing the data in Excel

Typically, you’ll want to plot the voltages against the time. The file contains a hidden formula which lets you create the time-axes automatically: select field D3, and double-click on its bottom-right corner. This will make Excel fill the entire column with the timestamp of that acquisition! 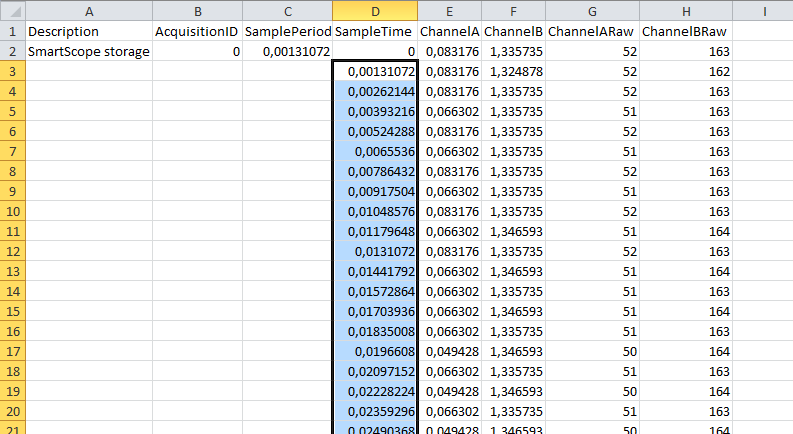 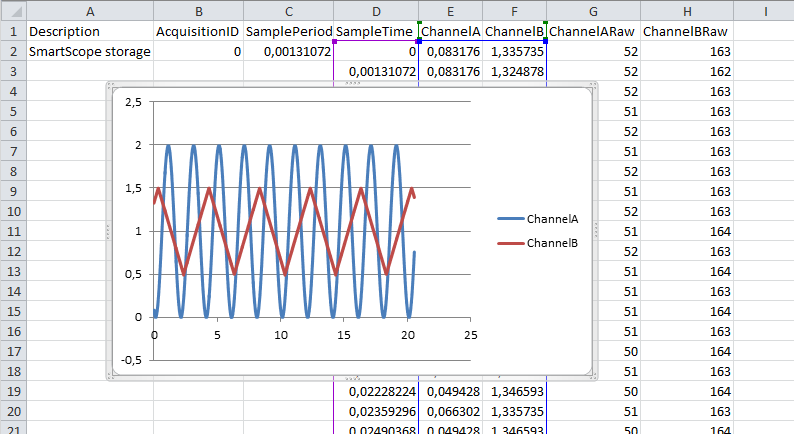